Founded in 1921 as Key Route Hardware (when the neighborhood was known as Key Route Heights), this anchor neighborhood hardware store has remained family owned and operated over the past 96 years, with only three families – 1921-1957, 1957-2017, and now with great plans for the next hundred years of service to our neighbors and to the needs of this unique neighborhood. Come by and see what we make fit into 5,000 square feet–you have to see it to believe it!

Jeff and Michelle Leopold were delighted to take over the ownership of this beloved neighborhood mom & pop hardware store as of April 26, 2017. Along with their business partner and General Manager Troy Welch, they updated the Laurel Ace store in fall 2017, culminating with a Grand Reopening celebration the weekend of October 20-22, 2017. In 2018 they expanded the Live Goods section, and in 2019 they painted the outside of the store and replaced the store’s awnings. The renovations have brought a fresh new look to this 99-year-old business, including a new layout and 4th register, new fixtures, increased product offerings, including Weber, Big Green Egg, Yeti, seasonal merchandise, and expanded categories throughout the store; notably housewares, canning, and nursery/live goods.

Delighted to be a part of Oakland’s Laurel District! 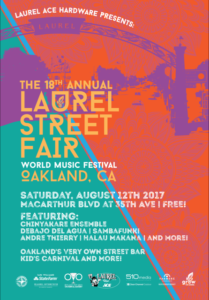